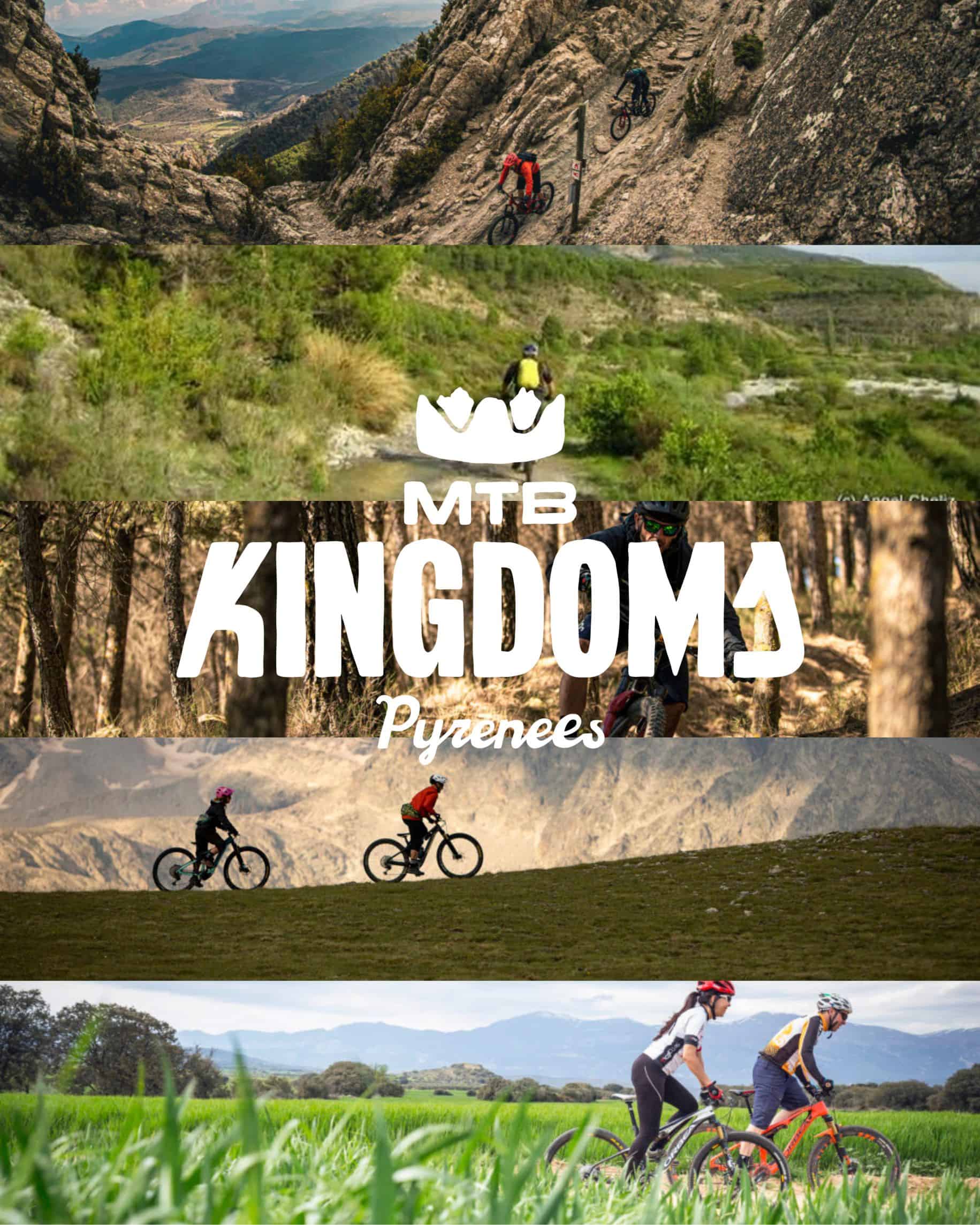 MTB Kingdoms Pyrenees is born, the new cycling destination brand, which is the union of Zona Zero Pirineos in the Sobrarbe region, Puro Pirineo in the Benasque Valley, Espacio BTT Alto Gállego in the Alto Gállego region, B-Guarain the Sierra de Guara and Reino de los Mallos Bike in the territory of Reino de los Mallos, all of them in the Pyreneesand and Pre-Pyrenees of the province of Huesca. A project that has the support of Huesca La Magia.

The union of “kingdoms”, means the joint offer of more than280 bicycle trails of all modalities, more than 10,000 kilometers of trails, more than 3,300 kilometers of conditioned paths and more than 360 businessspecialized in receiving cycling tourism clients.. With these data MTB Kingdoms Pyrenees becomes the largest cycling domain at national level and one of the most important in Europe.

A project born with the aim of promoting internationally the Pyrenees and Pre-Pyrenees of Huesca, as an attractive destination for cyclists from all over the world where you can cycle 365 days a year. All this, thanks to the great variety of routes, diversity of terrain and weather conditions between the 5 destinations that are part of the project at the moment.

Also, under the MTB Kingdoms Pyrenees brand, the aim is to ensure that the destinations that are part of it, share values and quality criteria, both in their routes and in their management and promotion. For this reason, they are working together on the development of a Manual of Good Practices MTB Kingdoms, which guarantees the recovery and maintenance of traditional trails, the involvement of local businesses for the development of the territory, a consolidated management structure, public-private collaboration and the promotion of quality of the destination, as essential requirements to be a “Kingdom” territory.

For the moment it begins with these 5 cycling destinations in the province of Huesca, which have been legally constituted under the formula of MTB Kingdoms Pyrenees Association. It is a project open to other cycling centers in the province, which meet the quality criteria and the adhesion of new “kingdoms” will be subject to the approval of the Board of Directors of the Association, which is formed by a representative of each cycling destination that is part of the project.

With this formula of association, it is also intended to act as a valid interlocutor for the Administration when it comes to transferring concerns and discussing possible problems related to cycling in natural areas, since it represents a large territory with more than 350 entrepreneurs directly linked to it.

Therefore, after the presentation of the project, it is intended to establish a schedule of meetings with various regional, provincial and county public administrations to convey the idea, mission and vision of this project with a vocation for international promotion, but also with the intention of proposing strategic actions for the cycling sector and traditional paths, with the intention of improving and consolidating the province as an international reference destination for cycling and thus attract more visitors during all seasons of the year.

Among the projects implemented by MTB Kingdoms Pyrenees during the year 2021-2022, there is this website www.mtbkingdoms.com, which has been developed in Spanish, English and French and presents the offer of routes of the destinations. But it also makes proposals of other tourist activities of interest in each bicycle center and proposes gastronomic proposals “essential” in each territory. In this way, the aim is to present an offer not only focused on cycling, but also on the aspects that are considered of interest to attract international and national tourism.

Furthermore, a communication plan has just been launched on social networks through the Instagram y Facebook channels (@mtbkingdoms), where posts will be published in English and Spanish, with the intention of publicizing the brand, the offer and reaching an audience in international destinations interested in the practice of cycling.

A series of promotional videos have also been made, one general and five short films of each of the destinations that are part of the brand. Also during 2022, the MTB Kingdoms Pyrenees Association was legally constituted.

For the imminent future, the actions are focused on closing a calendar of meetings with different entities, working together on the MTB Kingdoms Good Practices Manual, on the international communication strategy for the year 2023, as well as joint promotion and communication initiatives to raise awareness of MTB Kingdoms Pyrenees.

Therefore, the largest cycling destination at national level is born, promoted and managed thanks to the union of business associations and public administrations, working together under the same objective: to promote internationally the Pyrenees and Pre-Pyrenees of Huesca as a quality destination for cycling. Let’s go!